My first cabernet sauvignon of the season is a 2007 Kaiken from the Mendoza region of Argentina that ran me about $13. 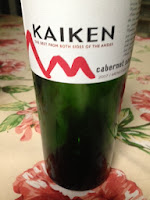 Since this is the first one I don't have much to compare it to other than to say it has a lot more body than the pinots I drank last winter and was much more velvety on the tongue.  I will say it didn't overnight well.  I went to drink a 3rd glass the next day and it was just on the verge of being undrinkable so I tossed the rest.

A nice wine in general though to drink with a filet mignon.

So I started my fall red wines with a 2008 Vega del Castillo granacha/grenache from Navarre that ran me about $6.59 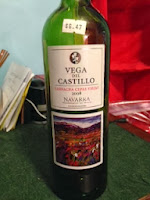 Since this is my first grenache of the season I don't have much to compare it to.  It seemed similar to pinot noirs but more interesting, not as bland as I found most of those.  Very berry, maybe some subtle spice.  The label says notes of violets (I didn't catch that) and black pepper (maybe) and "rich black fruit flavours" (like ... blackberry? plum? what?).

A nice wine at a good price, a good choice to grab if you're grilling steaks.

For my last two pinot gris of the summer (actually Clarksburg calls theirs pinot grigio), one from Napa and one from the Lorane Valley, southeast of Eugene, Oregon.

(the usual picture, which I was too lazy to take this time, goes here)

So the Clarksburg is your Get You Where You Want to To pinot grigio, inexpensive (under $10), a little on the sweet side.  Screw top to make the drinking go quicker.  I didn't mind it but I didn't drink it all either.

The King Estate from Oregon ran me close to $18 and was very nice, a good blend of acidity and various notes.

So this wraps up my spring and summer of pinot gris/grigios and Gewurtzes.  To sum up, I'd way that PGs aren't my favorite whites but they're not my least favorite either.  I drank cheap ones and I drank expensive ones, and in general they don't have enough oomph for me.  Gewurtzes seem like variations on a riesling theme.  I didn't find any that were funky or overly spicy, which is what Gewurtz tends to be known, or infamous, for.  Except for the one a week ago with a lemony sheen that was distinctive, most of them seemed pretty close to riesling to my taste buds.

After much deliberation I've decided for the fall and winter to drink cabernet sauvignon and grenache.  I've had the occasional cab over the years but don't know the grape well at all.  My original thought was to pair that with Italian reds, but then grenache popped into my head.  And then, I was checking out at the Liquee Mart today, there was a bottle of grenache sitting on the counter next to the cash register.  It was a sign.  So that's what we have to look forward to for the next six months.

A slight delay from my last posting because I only opened 1 bottle of wine, a pinot gris that I ultimately decided had started going bad, like a Pinot Walter White.

The last few nights I had a 2010 Brandborg gewurtz from Oregon's Umpqua Valley that ran me about $16. 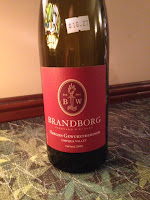 I like this.  It isn't a quasi-riesling like so many gewurtzes I've drunk this summer.  It had a nice lemony/citrusy sheen to it on the first night that I opened it. (Which unfortunately didn't last after a night in the fridge.)

I can see this going very well with seafood, especially highly seasoned dishes.

The last couple nights I drank a Starling Castle gewurtz from the Pfaltz region of Germany. It ran me about $12. 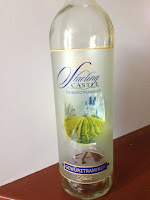 Nice enough but not my favorite this summer.  Mainly a sweet wine with not a whole lot of complexity to it.  If you're looking for something to sip on the patio it would be OK, but for a meal I would look for a gewurtz with more flavor and less sweetness.