Two whites today, a 2010 Incognito white blend from Michael and David Phillips and a 2011 La Giareta pinot grigio from the Veneto. 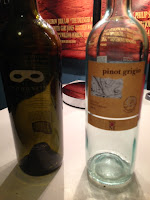 The white blend, from around Graton in western Sonoma, was originally $18 and change, on sale for $13 and pennies.  It doesn't specify on the bottle what's in the blend.  My general reaction was drinkable but meh.  Nothing stood out about it, either nose or notes.  It would be fine to grab when you need something to go with chicken, but it's not notable.

The pinot was one of the best I've had this summer, with more distinction than the usual run of the mill of this varietal.  It was citrusy and acidic but not overly so.  Even after a night in the fridge it wasn't bad.  I'd grab this one first to go with seafood or chicken, or maybe SE Asian food.