After 10 days of just drinking and not posting a 2011 Domaine Jacob aligoté from Ladoix-Serrigny in the Cote d'Or (missing hat on that -o-). 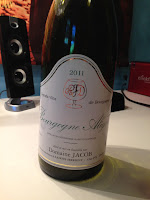 I really liked this white (although the back label says red wine) and downed it pretty much in one sitting.

I had never heard of aligoté before, so I looked it up on wikipedia.  Some interesting facts:  It's often used to make Crémant, the Burgundian version of champagne.  A kir cocktail is often made with this and cassis.

"In Burgundy, where it often loses land to more prestigious grape varieties, Aligoté is often planted only in the poorer vineyard sites at the tops and bottoms of the slopes. This variety is more tolerant to the cold. The grape ripens early with moderate yields and produces wines high in acidity that can be drunk young. "

I would agree with the statement on wikipedia that it has "a slightly herbal flavour and rather higher acidity than Chardonnay".  All in all I liked it and would make it one of my regular whites.