Two whites this last week, a 2009 chardonnay from Clos Robert in Mendocino County north of San Francisco and a 2011 Burgans Rias Baixas from Spain. 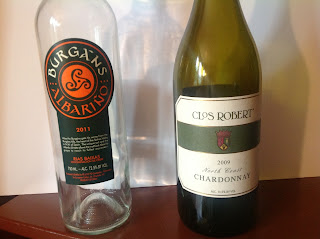 I've got to say I'm having a complete mental block on the Spanish white at the moment except that it was a screw top.  I couldn't tell you if it was sweet or dry if my life depended on it.

It's made from the Albariño grape. which is popular in the northwest of Spain.  Some think it's a riesling clone.  Wikipedia says that "The grape is noted for its distinctive aroma, very similar to that of Viognier,Gewurztraminer, and Petit Manseng, suggesting apricot and peach. The wine produced is unusually light, and generally high in acidity with alcohol levels of 11.5–12.5%.[3] Its thick skins and large number of pips can cause residual bitterness."

The chardonnay on the other hand is my second bottle from that grape in the last couple weeks.  I liked this one better than the first one: less oaky, less vanilla, a little drier.

It's a little more complex than the other chardonnay.  The label claims peach blossoms, apricot, and green apple; I'm not sure I got all of those (what does a peach blossom taste like?) but it wasn't bad.  The label also says that it's more in the French Burgundian chardonnay style.  I'm not expert on that, but since the oak is so much less prominent, I can probably see that.

Both were nice wines and very drinkable with a summer meal.