The last couple nights I drank a 2008 Baron Philippe de Rothschild pinot noir from France's Pays d'Oc that ran me in the low teens. 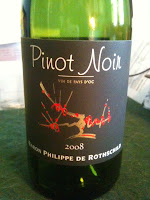 I wanted to like it, but in general my reaction was meh.  The first sip or two right out of the bottle (aerated) tended towards the vinegar end of the scale.  After a few minutes it opened up and more sweetness came into the mix.  It wasn't bad with food.

The label claims notes of morello cherry (I don't know what those taste like), blackcurrant (sort of, dried ones), and violets (I've had violet liqueur), but in general this struck me as a pretty generic pinot noir.

On the second night I liked it less than the first and didn't finish the bottle.  I may have gotten stuck with a lemon bottle, but in general I'd recommend other pinots for the price.