The last couple nights I drank a 2010 Albert Bichot Gevrey-Chambertin Burgundy, which falls into my pinot noir winter drinking, of course. 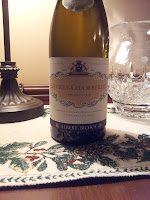 I ordered it online from invino.com.  This was my first order from them and I was happy with the service, but for $30 I wish the wine had been better. A lot better.

I can't say I picked up any particular notes from it. It was just a pretty generic red wine.  This pinot did perk up a bit when I drank it with food, but still not enough to justify a $30 price tag.

A note on the source: the label says Albert Bichot was founded in 1831 and has 4 estates over 240 acres across Burgundy with a variety of terroirs. Not my favorite terroirs.

Back to a better petite sirah, a 2006 Greg Norman petite sirah from Napa that ran me about $15. 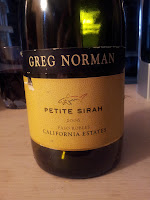 The label says notes of violet, raspberry, blackberry, plum, and anise. I definitely got the anise.  But there was another note that I couldn't identify.  Caramel or butterscotch maybe?  It made for interesting drinking.

On the other hand, this had a bit of a sharp edge to it that I didn't find with the Cameron Hughes earlier this fall.  It might be that food with it, like a London broil, would mellow it.

A nice petite sirah for the price; I recommend it.

The bad news first: I didn't like the 2010 Bogle petite sirah, not a bit, didn't finish the bottle. 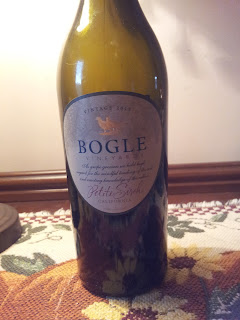 This ran me about $13; it comes from Clarksburg, south of Sacramento.  My friend at the Liquee Mart recommended it; I didn't care for her recommendation  for a pinot noir either.  The last time I listen to her.

I aerated this.  Many times the second glass is better than the first, but not with this wine.  I tried it with a piece of parmesan (frankly I think cheddars are better with red wine, parmesan with whites) and that didn't perk up the flavors.  Chips and salsa, which went well with my last pinot, didn't help either.

You may like this, Bogle's a big name after all, but it just didn't work for me.

This weekend I've drunk a 2009 Meiomi pinot noir from California's central coast (Santa Barbara/Monterey/Sonoma).  It ran me about $20. 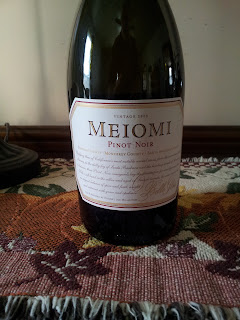 My friend at the Liquee Mart recommended it, saying it was about the best pinot they carry.  It was nice but it didn't blow me away.  I'd had brussels sprouts with supper, so admittedly those may have been playing not nice with my taste buds.

I aerated it and used my oversized red wine glasses for it, which really accentuate the nose.  I got cherry from it; the label claims generic berry.  It did become more velvety as it got more air in it.

After the 1st glass, which didn't bowl me over, I drank some with chips and salsa (moderately spicy).  It really worked well with those, much better than as sipping wine.  I bet it would be good with burgers.  The food also brought out sweetness in it.  This wine also overnighted well; the rest of the bottle was good the next night, better than the first glass I'd drunk.

In general a nice pinot to go with food, though I'm thinking you can find ones just as good for less than $20.

With the accents missing over the e's.

Carmenere is one of the supposedly 6 original grapes of the Bordeaux region, and it's also known as Grande Vidure.  It's grown more abroad (like this one from Chile) than in France.  I think this is the first time I've ever drunk it. 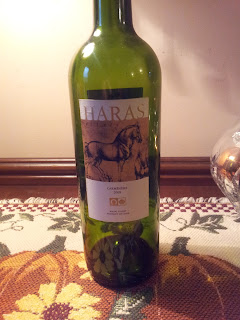 This bottle hails from the Maipo Valley in Chile, which the Maipo River runs through towards the Pacific.  It ran me around $10.

Carmenere is most often used to add oomph to other grapes, but this bottle is all these little babies.  It's darker and has decidedly more body than the pinot noirs I've drunk lately and even the petite sirahs; it's not like them at all.

I need better glasses for getting the nose of a wine, this one had more nose than most of my pinots.  My tasting notes say I got a chocolate note maybe, also something earthy, perhaps coffee.

It tasted almost like an Italian wine, with its body.  It wasn't as good with cheese as I thought. I drank some with both some yellow cheddar and some good parmesan, and those didn't bring out the flavor as they do with pinots.  I'm guessing it would be good with grilled meats or BBQ.

The label says it has smoky and wooden notes (echoed on wikipedia), so that may be what I was getting.  Wikipedia also describes wine from the grape as having earthy and chocolate notes sometimes, so I'm getting better at this.

A nice wine (with a meal, not on its own).  I'd like to try other wines from this grape from other vineyards.

This week I tried a 2009 Cameron Hughes Lot 266 pinot noir, which I got on sale for about $12.  I really liked their petite sirah, and I liked this pinot too. 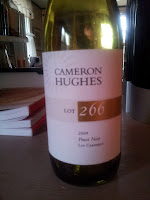 I'm still not converted to being a pinot fan, but this was fruity, maybe a little chocolaty, very smooth.  I drank some with chili I'd made, and it didn't work at all.  Then I tried some later with a chunk of cheddar, and it really worked.  Really good, and as you frequent readers know, I haven't been a pinot fan..  It also keeps well; I finished it a couple-three days later, and it was still drinkable.

The label describes it as "silky smooth" with notes of blackberry, lavender, and violet.  If you like pinots, a nice wine at a good price.