The last week I've drunk two 2009 petite sirahs: a Cameron Hughes 229, which the wine store lady described as 'to die for', and a Spellbound, which I describe as 'to die for'.  (Apologies in advance for the poor pictures.) 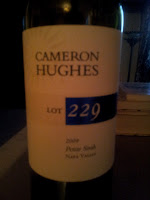 I didn't note how much the Lot 229 is but I'd guess around $14.  I decanted both of these, and both seem sweeter than the pinot noirs I've had.  The first glass of the Lot 229 I really liked.  It had interesting flavors, definitely dark fruit and maybe licorice?  The wine lady described it as 'inky'; I noted that it seemed a little 'chalky'.

Now, for some reason, I didn't like the second glass nearly as much.  I drank it only about an hour after the first glass, and I decanted it too, but I didn't like it at all.  I had eaten something in the meantime, so that might have been playing havoc with my taste buds.  The rest of it sat for a bit too long to judge what the subsequent glass tasted like (not great), but the first glass was great.

Second was Spellbound's 2009 petite sirah.  This is made by Robert Mondavi Jr. in Napa. 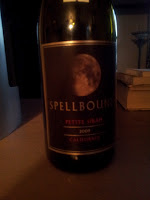 This wine was the reverse of the Lot 229.  I didn't like the first glass all that much, but the second glass I drank with a piece of cheddar and all of a sudden it opened up.  I got peppery and chocolate notes in addition to the usual dark fruits.  I drank most of the bottle that evening.  The next night I finished it with a little supper, and it wasn't quite as outstanding but still tasty.

I want to try the Lot 229 again with food and give it a second chance, but right now I'd recommend the Spellbound, a really nice petite sirah.