I'll start this time with the Riesling I liked least.  The 2009 Clos du Bois is a drier Riesling, but it doesn't have the grapefruit notes of the two I reviewed a couple weeks ago. This hails from Geyersville, CA, which is just up the road from Santa Rosa, and it ran me $12. 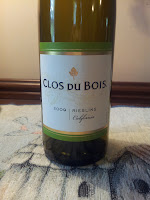 The label describes the Riesling as having a 'crisp acidity,' but I found it a little on the funky side, not entirely attractive.  After the wine had sat in the glass for a few minutes, it did open up a bit and become a little sweeter.  I'd say it has some minerality to it, like some wines made from the sauvignon blanc, but in general it was bland.  My least favorite Riesling that I've tried. 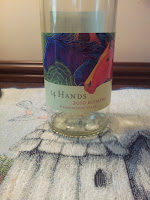 I didn't jot down notes for this wine, just that it's a sweet Riesling.  The label describes it as having apple and pear, and I'd agree with that.  Not a bad Riesling if you like the sweeter varieties. 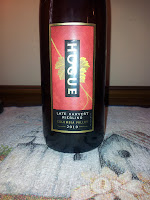 I agree 100% with the label on this one:  honey, orange peel, apricots.  Maybe not the apricot; I got a lot more apple than apricot, but that mellowed out somewhat so it was less like very nice apple juice after it had aerated.

I got the honey, and the bite of orange, almost a bitter orange, added a nice note to it.  I'm not big on sweet wines, but this was quite good and would go well with fruit or cheese.