Running a bit behind again, but my choice of white wines this summer hasn't been the best to get me writing about them.

It's now fall [by 2 days] and I'm wrapping up my summer whites.  I have one more chablis to go and then a higher-end Sancerre that won't get here till mid-October.  Lot18 apparently thinks it stays hot in the Midwest until mid-October.

This 2008 Jean-Marc Brocard chabils ran me in the mid-$20 range and is 12.5% alcohol with a straw color. It has a screw cap, if you have strong feelings about those.  My colleague at http://vinopelz.blogspot.com/2009/12/2007-jean-marc-brocard-chablis-domaine.html describes this as "the perfect everyday Chablis" [if you drink Chabils everyday] and I'm inclined to agree.

I liked this a lot better than the first chablis I reviewed a couple weeks ago, which was far too austere even for my dry white-preferring tastes.  I had a cold while I was drinking this, so I can't really comment on the nose (of which I couldn't smell much] or any subtlety of flavor.

It seemed a bit sweeter than the last chablis.  In general I don't like sweet wines, but anything sweeter than the other one is a good thing.  The acidity was fairly subdued and more subtle than a lot of whites, it didn't pack a kick.  In general a nice chablis at a good price.  It would go well with seafood or a seafood pasta. 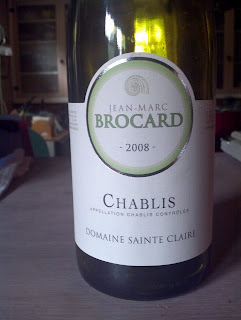 For the end of my summer wine tasting, I'm finally getting around to trying chablis.  Chablises?  Whites from the Chablis appelation, which is the northernmost wine region in Burgundy. 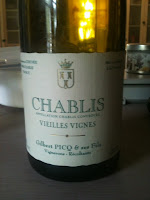 I believe this is the first true chablis I've ever drunk.  I may have had a California version at some point over the years.  This bottle is a long way from the Spanish whites and the Sancerres (made with sauvignon blanc) I've been drinking this summer.

The wikipedia entry on chablis wines says they're made with the chardonnay grape, don't tend to be oaked, and are "renowned for the purity of its aroma and taste."

I don't know that I'd describe the flavor and aroma of this 2009 Gilbert Picq [running me between $20 and $25] as pure, but I'd agree with wikipedia about the "steely" notes.  I tend to like anything minimal, but this wine was a bit too minimal and one-note and not very subtle for me.  Maybe because it's a long way from the whites I've been drinking, but I just didn't enjoy drinking it.  I didn't finish the bottle, though it would have been fine for cooking.  Others may like it; it just wasn't the wine for me.

A pocket review of a 2007 Argentinian sweet wine, a Bodega Norton Cosecha Tardia.  I bought this on clearance for about $7.  I would describe it as an Argentinian Sauterne.

It's pretty sweet, no particular nose, no particular subtlety of flavor, though it does pack a slight acidic punch.  I was thinking what you would eat with it and decided that it would work well with a cheese and fruit plate.  The sweetness would work well with a cheese that can stand up to it.  Not a wine that I'd drink on a regular basis, but a good choice for a party.

I'm going back to making cocktails once in a while, like when I started this blog.

To find drinks to try, I'm going to use Internet Cocktail Database's Random Drink Generator, which is always a lot of fun, kind of like Russian Roulette.

My first spin of the barrel today came up with a pousse café, and though I had the 4 ingredients it called for (including creme de violette, remarkably enough), I've never been good at pouring those, and I don't have a good glass to build it one.

Second up was a Scotch Stinger, so I went with that. 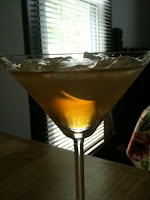 I used Johnnie Walker Black for the scotch.  I'm not a big mint fan, I can take it or leave it, usually leave it, but this isn't a bad drink:  smokey, not overly minty.  I tend to be a minimalist, but this drink could use a little more complexity.  One more ingredient, I'm not sure what, and it would be a really good drink.  I wonder how a little bacon would be in it.  Really.  Just a thought.

My next-to-last Sancerre review of the summer; I have one coming that I bought from Hops and Grapes.  After that, I have 3 chablis to drink before fall officially begins. 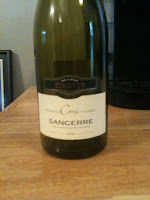 This bottle was a 2010 Domaine La Croix Saint-Laurent.  The label describes the wine as "dry, fruity and has the aroma of white flowers and exotic fruits," which I agree with [not sure about the white flowers--that covers a pretty wide spectrum].

This has been sitting around for 10 days since I finished the bottle so my memory of it is faded, but my notes say it has a Sauvignon Blanc nose and is fruity and slightly acidic.

The label says it would be good as an aperitif or with fish or shellfish, which I'd agree with.  A nice wine for the price [about $25].