2 Sancerres and a generic white

Somehow I've fallen behind on reviews again and the wine bottles are stacking up.

First up is a generic Mediterranean white made by Rene Barbier that ran me $6.00.  With my limited knowledge of Romance languages, it's apparently Spanish, in spite of the French maker's name. 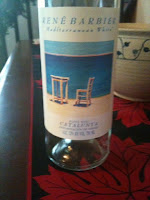 This is an OK, everyday wine.  My notes from 3 weeks ago say that the nose was a little SB-ish, but the flavor wasn't.  It's citrusy and light with mild acidity, none of the strong hit of acidity on the finish that you get with some whites.  I used an aerator for the first time with this wine, and I think it really helped to open it up.

Next, I decided to try some Sancerres since I don't think I've ever drunk one.  Sancerres, of course, are made from the Sauvignon blanc grape.

First up is a 2008 Sancerre from La Poussie that I think ran me in the $25 range.  Sancerre is in the north-central part of the country, almost exact center, on the Loire. 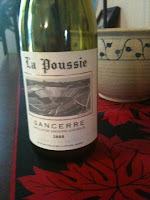 This was ok, a little minerally, not that I walk around with gravel in my mouth so I know what it tastes like, more complex than most whites, slightly acidic, and it doesn't taste like a SB even though it's made from the same grape. 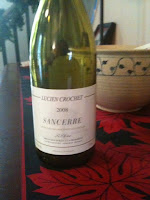 I liked this one better than the La Poussie: it was slightly sweeter, less acidic, definitely more of a SB nose.  It doesn't go great with Havarti cheese though.

I used a new wine aerator with all three wines, and my impression is that really does help to open up the flavor if you drink straight away after opening the bottle.  The Lucien Crochet got forgotten in the fridge for a few days, and it definitely lost a lot of its nice subtlety of flavor sitting in there.  Next gadget to use: my new wine pump.

Both Sancerres would make for a great dinner wine to go with a variety of courses.