Over a couple evenings I drank a 2006 Montecillo blanco from Rioja.  This was made with viura grapes using cold fermentation. 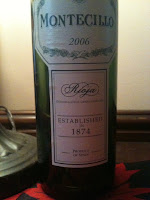 I'd never heard of viura grapes; they're also known as macabeo or macabeu. This is what wikipedia says about them:  "The grape is used to make mildly acidic and young white wines mostly suitable for early consumption or blending with other varieties, both red and white. It is often the main grape of white Rioja and is sometimes blended in small amounts with Tempranillo and red Garnacha, both in unoaked and oaked versions. It was introduced in Rioja after the phylloxera epidemic, where it largely replaced Malvasia and Garnacha Blanca, partially because of the ability of its wines to better withstand oxidation."


I got this on sale for under $5, and I'm guessing it was marked down because it was getting a bit long in the grape tooth.  I found it pretty acidic the first night; I could have poured it over scallops and made a nice ceviche.  After a night in the fridge the acidity mellowed, and it was more drinkable, though no great subtlety of nose or flavor.

In short, aeration might help.  Drinkable if you like a wine that's got more of a bite, and it would go well with fish.