I couldn't find any French or Spanish whites locally, so I picked up a couple viogniers to fill the gap.


The first bottle I drank is a 2006 Kunde Estates from Sonoma. The label describes the wine as "aromatherapy in a glass. Thick with the scent of jasmine and orange marmalade and accented by exotic spice." 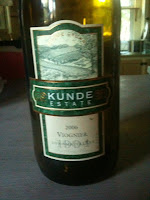 I didn't think the wine lived up to its billing.  I liked it least of any whites I've drunk lately and didn't think it had any subtleties of nose or flavor.  Wikipedia says "Viogniers more than three years old tend to lose many of the floral aromas that make this wine unique. Aging these wines will often yield a very crisp drinking wine which is almost completely flat in the nose" so this might have been part of the problem, it was past its prime.  It was on sale for a reason.  Actually, I liked it better after a day in the fridge; it has a screw cap.


Probably in general Kunde is a better wine than this bottle.