Changing my Spanish whites slightly, I've been drinking a 2007 Marqués de Cáceres dry white from the Rioja region of Spain.  This is in the north central part of the country, not too far from the Pyrenees. 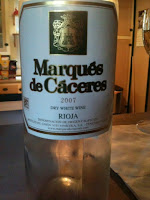 This wine is made from 100% viura grapes, which I'd never heard of.  Wikipedia has a good piece on them: "The grape is used to make mildly acidic and young white wines mostly suitable for early consumption or blending with other varieties, both red and white. It is often the main grape of white Rioja and is sometimes blended in small amounts with Tempranillo and red Garnacha, both in unoaked and oaked versions. It was introduced in Rioja after the phylloxera epidemic, where it largely replaced Malvasia and Garnacha Blanca, partially because of the ability of its wines to better withstand oxidation."
The label describes the wine has having a silky texture, which I'd agree with.  I didn't get their "floral aromas", and it definitely wasn't as fruity as the Spanish whites I've been drinking the last month or so.  It's definitely more acidic, though not obnoxiously so.
The labels says it would pair well with seafood or hors d'oeuvres, which I think is pretty much on the mark.  I finished up the bottle with hamburgers [doctored up], and that wasn't the best pairing.
Not my favorite white, but it definitely has its place.