Three very quick write-ups--hopefully the pictures will say 1000 words--to get some empty bottles out of here. 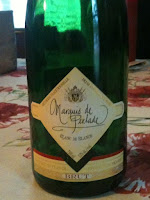 It's spring so I'm switching to whites.  I'm still debating exactly what whites to focus on through September, so today's report is a bit of a grab bag.
My friend at the local Liquee Mart recommended this blanc de blanc that they had featured at a wine tasting a few days before, so I picked it up.  It ran me roughly $10.
I've never had a blanc de blanc before.  This is a Marquis de Perlade that hails from Sigolsheim in Alsace.  If you, like me, don't/didn't know what a blanc de blanc is: it's a sparkling wine, usually made exclusively from chardonnay grapes. The label doesn't say if this is 100% chardonnay.
I liked it.  The wine seemed a little dry at first, though I tend to prefer dry wines, but a sweetness comes through.  A good balance of the two. I'm not that big on sparkling wines from anywhere, but this one isn't bad and would be nice with a meal. 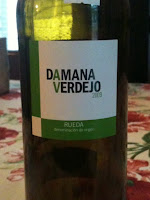 The second wine is a 2009 Damana Verdejo from Rueda, Spain, which ran me $15.  Rueda is in the NW part of Spain a little south of the latitude line going through the northern border of Portugal, and is a major wine-growing region best known for its wines made from verdejo grapes.
Verdejo grapes are very interesting. I'll try to talk more about them again, but I'll start by saying they were used to make a sherry-type wine until the 1970s, when a move began to make whites from them.
My first take is if you drank this without knowing what it was, you'd think it was a Sauvignon Blanc [and it's often mixed with SB for blends].  Both the nose and the taste, though I didn't get any of SB's infamous 'cat pee'.  I like SBs, and this one was full of subtle notes.  I think I got some vanilla, and it was very fruity, tending towards apple.  I drank most of this bottle in one sitting [and didn't get a major buzz from it].  I really recommend it. 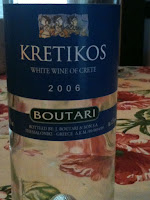 Last, a bit of an oddity, is a white from Crete, a 2006 Kretikos Boutari from the northern part of the island made with the indigenous Vilana grapes.  I picked this up on sale for $10.
I drank this a couple weeks ago so my tasting memory has faded, but it reminded me a little of retsina.  I'm one of the 5 Americans not of Greek extraction who like retsina, so I liked this wine.  It wasn't stellar but it was enjoyable.  This would go well with appetizers or maybe more strongly flavored fish or octopus/calamari.