At the end of the month I'm switching to whites for the summer, and it'll be none too soon.  I still haven't found my perfect syrah or chiantis.

No chianti to report on this time, but a pinotage, which I don't think I've drunk before. 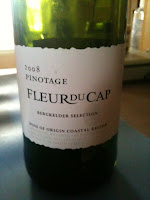 This 2008 pinotage comes from Stellenbosch, South Africa, which is about 30 miles east of Cape Town.

Pinotage was first developed in 1927 from a cross between pinot noir and cinsaut [also known as Hermitage thus the name of the grape].  The wikipedia entry says: "It typically produces deep red varietal wines with smoky, bramble and earthy flavors, sometimes with notes of bananas and tropical fruit, but has been criticized for sometimes smelling of acetone. Pinotage is often blended, and also made into fortified wine and even red sparkling wine."  It's mainly produced in South Africa, though it's not a huge part even of their production.


I liked it.  I also liked the South African syarh that I had a couple months back; that one had a pronounced smoky note.  My friend at the local Liquee Mart says she and the owner don't care for South African wines, I don't remember what her reason was, but I've liked the 2 I've had.


The label says this is made in oak barrels and has notes of cloves, vanilla, and berries with a distinctive finish; that's pretty much what I got from it.  It would be great with a nice steak.


The other wine comes from closer to home, a 2005 Sonoma County Rosenblum Cellars syrah. My tasting notes for this [I drank it a couple weeks ago so don't remember much about it now] say it's lighter than other syrahs I've drunk this winter, not as sharp, definitely fruity and maybe even some caramel notes.


I liked this wine and finished the bottle.  This would be a nice addition to a dinner party.  I didn't jot down the price of either of these, but neither one was more than $20.