I'm catching up on a couple weeks of drinking syrahs in this review.

The first is a 2007 Big Tattoo Red, which is a blend of half syrah and half cabernet sauvignon, from Chile's Colchagua Valley.  This winery donates 50 cents of every bottle sold to the local community in memory of the owners' mother, who died of cancer. 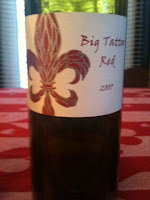 This bottle ran me about $12.  I found a slightly offputting note to it, maybe more tannins.  It has slightly different notes, which I couldn't identify [I'm working on that], than other syrahs I've drunk recently.  The label boasts its fruitiness, but I noticed the oaky notes.  I didn't finish the bottle.

Next is a Spanish shiraz from the La Mancha region, a 2007 Rojo Mojo.  This one ran me $10.50; the label boasts the usual fruits, as well as cinnamon, black pepper, and cloves. 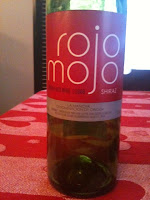 The more expensive Spanish syrah that I reviewed a month or so ago was one of my favorites this winter, and I liked this one too.  There must be something about Spanish syrahs.  I didn't jot any tasting notes other than I liked it.  I drank the whole bottle, which I haven't done too often with the syrahs this winter, so that's a recommendation for it.

Last is a 2008 Michael & David Phillips syrah; they're based in Graton, California.  Graton was the farthest that Russian settlers moved into North America, and they planted the first grapes. 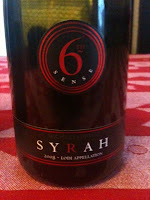 This bottle ran me $15; maybe I was paying for the fancier than usual label and some of the pretentious twaddle on the back.
I didn't like this syrah at all and drank at most half the bottle.  It had a bit of an off-taste, almost medicinal to my taste buds.  It also had a slight smoky note, which was ok, like the South African shiraz from a couple months ago.
I thought it might be better the second day.  It was, slightly.  Not as medicinal, but it still seemed a bit sharp.
I've about decided I'm just not a fan of syrahs, or else I'm not finding the good ones.