I've been too busy with work and haven't posted in a couple weeks but I haven't stopped drinking. With all the work I've needed it.

First off is probably the best syrah I've drunk all fall and winter, a 2003 Marques de Grinon [with a curly thing over the n] syrah from Spain.  I didn't even know Spain produced Syrahs; this is from the Dominio de Valdepusa estate.  This wine is aged in oak for a year and ran me in the mid-$20 range. 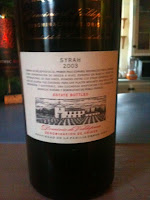 My tasting notes file disappeared [new laptop; you know how that goes], but I remember this having just a tad more sweetness, which helped ameliorate the tannins, which I've decided are a main reason I haven't been big on syrahs.  It had strong vanilla notes, and I also remember thinking that 'Oh, this is what oak tastes like'.  I finally got that.
All in all, a very fine syrah and a good choice for a higher-end dinner.  It didn't hold up particularly well over several days; I forgot I had it and didn't get back to it for at least 2 days, and by then it had lost a lot of its delicacy of flavor.
Next up is a chianti, no date, just commercial, made by Candoni.  I was talking to a good friend who works at the local Liquee Mart, and I was telling her I haven't been impressed by any of the chiantis I've been drinking, they taste like pizzaria vino.  She agreed that she doesn't care for chiantis either; she said they taste flat, and I would agree with her 100 percent. 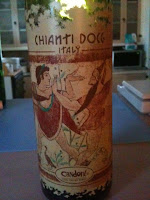 That being said, this is probably my favorite of the chiantis thus far.  My friend recommended it; she said Candoni makes other good wines and I should try it.  It ran me about $10.
It's a tad sweeter than the other chiantis I've tried, and like the Spanish syrah, I think that helped make it palatable for me.  It didn't have any particular delicacy of flavor or nose, but it was drinkable.  This is one of the few chiantis where I drank the whole bottle. The bottle says it would be good with cheese, and I can see that.
Last, as a bonus review: my friend also recommended a 2008 Apothic Red from California (specifically Modesto).  This is a blend of syrah, zinfandel, and merlot and ran me $10. 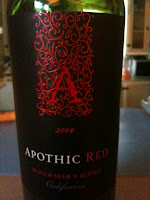 She said this is a big seller, and I can see why:  it's very flavorful.  It's one of the fruitiest reds I've drunk.  The label says vanilla and mocha; I was catching plum maybe.  It's also a sweeter red, a little too sweet for my taste, but I could see why it's popular.  A good everyday red blend for just casual evening sipping.

2011 begins with me still searching for a syrah/shiraz and a chianti that I really like.  Haven't found one yet.

However, a 2008 Greg Norman shiraz-cabernet sauvignon blend that ran me in the mid- to high teens went down a lot more smoothly than most of the syrahs I've tried. 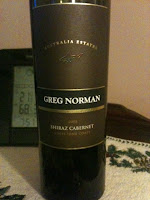 I took this over to my sister's when she invited me for lasagna after a tiring evening of shopping at Sam's Club [and expensive; never shop for groceries on an empty stomach].  She said she's not big on syrahs, but she liked this too.  She let her son taste it, and he made a face and said it was too dry for him.  Kids.
This Greg Norman was sweeter than most of the syrahs I've had. The label says it has dark cherry, plum, and blackberry notes, which I'd agree with.  This is one syrah that I'd drink again.  It's a little higher priced but would be good at a dinner party. 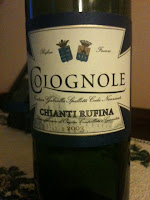 I don't have much to say about this 2003 Colognole chianti rufina except to say I drank it.  I don't think I finished the bottle.  It ran me $16 on sale.  It tasted like chianti to me.
I looked up chianti rufina, and Rufina is at the top of the pyramid of the Chianti areas.  I'll keep trying, but I haven't discovered yet what people see in chianti.  Maybe I need to eat it with an Italian meal?

I stumbled across this Greek syrah from the Atalanti Valley at Kahn's on the east side of Indianapolis; I didn't know that Greece produced syrahs.  I looked up the Atalanti Valley, and assuming it's near the town of the same name, this wine is from the east central part of the country. 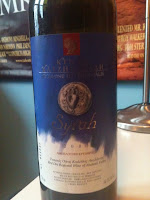 This syrah had some interesting flavors.  I got some "earthiness" from it, and maybe pine, like retsina, and licorice/anise.  The licorice came through more strongly the second day.  This was sweeter than other syrahs, though the body seemed a little thin.
Ultimately I didn't like it all that much.  Admittedly, red wine usually isn't at its best the next day after it's been opened, but I didn't finish the glass I poured, and I emptied the rest of the bottle.  Other people might like the licorice/pine more than I did.