I'm still not keeping up on writing these reviews, but maybe in 2011.  I've never seen a December that was this busy.

The first South African shiraz I've drunk lately was a 2004 Sincerely produced by Neil Ellis Wines in the western Cape.  It ran me $17. 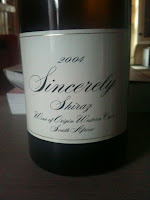 This shiraz has very distinctive smokey notes in it--almost too much so.  After the first glass my mouth tasted like I'd smoked a cigarette with my wine (though it's been a while since I've done that).  After a day, though, the smokeyness wasn't nearly as pronounced.

It was also less intense than the primarily U.S. syrahs I've been drinking thus far this fall.  It's more delicate, more towards a chianti-like body.  I liked this wine, though it might be an acquired taste for many people.

The second one was a 2004 Guardian Peak, also from the Western Cape.  I think this one ran me in the low teens. 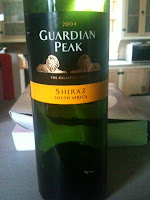 This shiraz wasn't nearly as distinctive as the Sincerely bottle.  It was closer to U.S. syrahs, a little sweeter maybe, not particularly outstanding but OK as a wine to serve with dinner.  I have a little left that I'll probably use for cooking.
Newer Post Older Post Home