I didn't realize it had been so long since I wrote up a bottle of syrah--over 3 weeks--but I should have known from the bottles accumulating in my kitchen.

I'm just going to give a quick summary of the 3 syrahs I've drunk lately and not give detailed tasting notes.  One thing I've noticed, being something of a neophyte in the field of syrahs, is that these reds really do need time to adjust once you uncork or unscrew the bottle, and probably even decanting.  If you drink some of them right out of the bottle, they aren't very good at all.  Some were more noticeably mellow the second day after opening, although that's not optimal for drinking wine, of course.

The first is a 2007 Yalumba shiraz (94%)-viognier (6%) blend from South Australia.  When I drank my first glass of this, I didn't like it at all.  It was bitter, and it almost tasted like a straight blend of a red and a white mixed together.  Here's a case where wine was better the next day: mellower, sweeter, subtle, and even the nose was much improved. 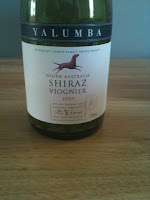 Next was a 2003 Glass Mountain syrah from California that ran me in the $9 range on sale.  I guess I didn't make any tasting notes on this, but I don't think I finished the bottle.  In general I wasn't impressed by it (for $9, what could I expect?). 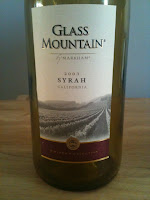 Last is a 2008 Veo Ultimate syrah from Chile.  This one has detailed notes on the back of the bottle on how it was produced, and they note that it will benefit from decanting.  I should know by now to read the instructions first.
This bottle struck me as very blah on first taste, although it had a more fragrant nose than the other two.  On the second day, this one too had mellowed and was a little sweeter, with a lot more flavor. 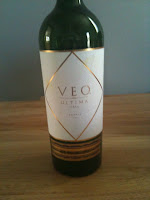 I guess if I'm going to appreciate syrahs that I need to buy myself a decanter for Christmas.

Still running behind on postings, but I promise to do better.  Sometime.

I started my fall/winter 2010-2011 syrah and miscellaneous reds sampling this week.

First off was a 2006 Snoqualmie syrah from the Columbia Valley in Washington State. 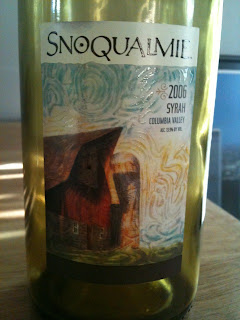 The label claims notes of blackberry, cherry, spice, and 'a touch of oak'.  On first tasting, I got a strong molasses note.  I love molasses, so I liked it out of the gate (or bottle).  I think I also got a black cherry note, which I guess is a cross between their blackberry and cherry.

Ultimately, however, I wasn't all that keen on this wine.  It was a tad sweet for me, and I didn't finish the bottle.  Maybe a little stronger tannin kick would have helped my appreciation of it. I didn't write down how much I paid for it, but it was in the $10 range.

I'm also working my way through chiantis this fall and winter.  My first one was a 2002 Terrabianca Scassino made with 97% sangiovese grapes and 3% canaiolo (which, honestly, I've never heard of).

This was a $29 wine on sale for $18, and even $18 was too much for it.  There was discoloration of the cork, so I think the wine might have gone a tad bad.  It showed no character and was just a step up from red wine vinegar.  I drank a couple glasses of it, but it was definitely problematic.  It could have been used in cooking, but $18 (let alone $29) is a lot to pay for a cooking wine.

I let the week get away from me in writing up my wines.

I came across another viognier, so I decided to try it as my last white of the summer and compare it to the viognier I reviewed a couple weeks ago. 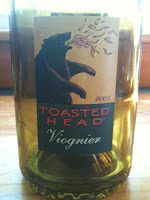 This 2005 Toasted Head is from the R.H. Phillips vineyards, located in the Dunnigan Hills up in Yolo County, CA.

I could tell the difference between the 2 viogniers as soon as I opened the bottle (cork).  Much more interesting nose than the other one.

The wine had more interesting flavors as well.  I fell down on my tasting duties and didn't jot down notes, but this bottle was considerably sweeter than the other viognier.  Almost too sweet for my taste but just on the edge.  It certainly didn't have the acidic kick of the SBs I've been drinking all summer.

Not a bad white wine for grilling or a pasta dinner maybe.  I got it on sale at about $13.