I bought a bottle of Lazzaroni amaretto at the liquor mart the other day.  Lazzaroni is the one made by macerating amaretto cookies.  It looked interesting (and was cheaper than Di Saronno) so I figured it'd give it a swirl. 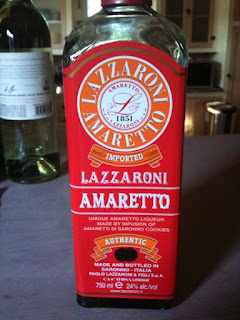 A quick review of three 2-part mixed drinks that I made with it.

The first is 2 to 1 Southern Comfort to amaretto, which Internet Cocktail Database calls a 'Sicilian Kiss'.  I like SC, but this was too overly sweet for me.  I was reaching for the insulin.  I'd drink an amaretto sour before I'd order or mix up one of these.

The next one is 1 1/2 oz bourbon (I used Jim Beam single barrel) to 1/2 amaretto, called either 'Boss' or 'The Godfather'.  In this one the bourbon overpowered the amaretto, which didn't come through very strongly.  A bourbon and branch would have been better.

Last, a variation on the Boss using blended Scotch; I pulled out Johnny Walker Black.  I'm not a big blended Scotch fan, but this wasn't bad:  the amaretto came through, and the sweetness took some of the edge off the Scotch.  I wouldn't order it out, but not a bad drink.