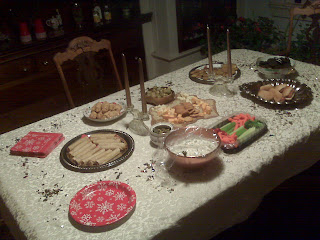 I decided to co-host a cocktail party on New Year's Eve as part of FoodBuzz's monthly round of dinners and parties all given on the same day. When I signed up for it, for some reason I thought the conditions were it had to be given by the 31st, not that it had to be given on the 31st! Lesson #1 in planning this party is to always make sure you know when you're going to hold a party before you agree to do it.

New Year's Eve isn't a great night to give your first party unless you've been doing it for years and/or have a very large circle of friends. I don't have either, so when I saw what I'd gotten myself into, my friends David and Bonnye Good agreed to co-host it. Two circles of friends are better than one, we thought. As it turned out, maybe not! 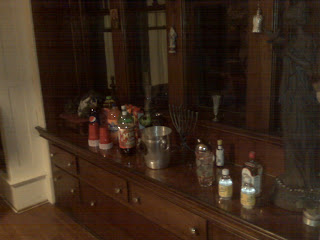 David and Bonnye have a great, early 20th-century house here in Seymour, IN, that they bought from the estate of the lady who'd lived there. They're only the 3rd family to live in the house. (I'm only the 3rd family to live in my house, built in 1910 and down the street from them, not counting some short-tenured renters.) They have a little boy, Xander, who's in kindergarten at the local Catholic school, a 12-year-old dalmatian, Charlie Sue (aka Charles), and a cat, Emer.

Seymour is known as the hometown of rocker John Mellencamp - not his "home" as the signs on the way into town claim; he lives over in Bloomington, IN, but his family is still here. Seymour is also known as the site of the first train robbery in U.S. history. And the inventor of Barbasol was born here. 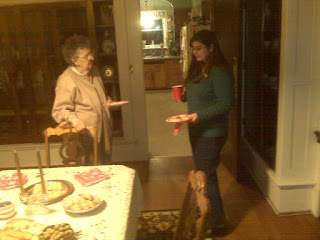 I sent out the invites a little more than 2 weeks before the party, and asked invitees to RSVP to Bonnye. Lesson #2 is to plan on having to follow up with people to see if they're coming. By the end of last week we hadn't had any RSVP's, so Bonnye started calling people.

Now, allow me to get on my soapbox for a minute here. If you receive an invitation from someone, whether or not you're able to go, or want to go, be polite enough to take 60 second to pick up the bloody phone and RSVP! It's just the polite thing to do! I know the excuse for everything these days is that people are more busy than they've been since 10 million BC, but show some basic manners! OK, diatribe over. 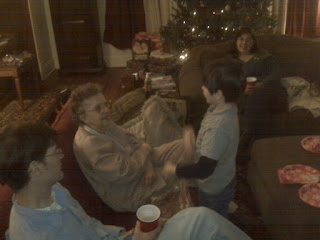 One family was going to be gone, a couple others had parties they were already going to (mini-lecture #2: you can always drop in for a few minutes to a party, just make sure your hosts know you're going to do that and have your exit plan ready), a few others said they would try.

At this point I jettisoned the menu I was going to make in the proposal I'd submitted to FoodBuzz. I had been going to try to pair cocktails to my party foods, but it looked like we weren't going to have enough people to make that viable. So lesson learned #3: be ready to adjust your plans and figure out an easy party.

I'd bought some holiday paper plates and napkins on sale the 26th, so we had those already. For beverages, frankly I forgot to buy cups, but I'm a big Solo cup fan, so those came out of the cupboard. Bonnye had a pretty holiday tablecloth. 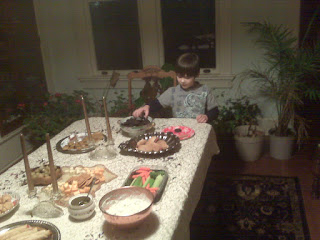 I used to have a china set with lots of quirky little serving dishes that I'd bought on ebay to match the original dishes I'd been given, but I'd passed that on to my niece. So, lesson #4: improvise. Anything will work for serving dishes. Bonnye had some platters. I had a honey pot from Israel that I used for nuts and a couple other small bowls.

Let me cut to the chase on attendees: we had only Bonnye and David and Xander and Charlie Sue and Emr (who graced us with her presence all night, curled up on the ocuch), me, and my mom, who's a retired nurse. That was it. No one else showed up or called at the last minute to say they couldn't make it. But I'm not bitter! (A tad irritated still, says the perceptive reader.) But we all had a good time and spent a couple hours chatting. It was good for mom to get out on New Year's Eve for probably the first time in many moons, and Xander kept busy coming in to show her things he was doing. Mom's dog Holly knew when she got home that she'd been fooling around with other dogs. 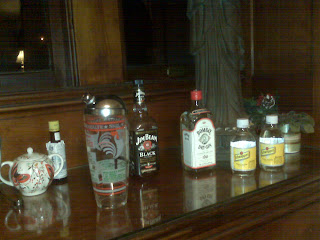 As to the food and drink: when we had to jettison the original menu, we decided to go with a mix of store-bought and homemade. Bonnye joked that she felt like it was a TGI Friday's party, but it really wasn't. For drinks we had various liter bottles of pop (Pepsi, root beer, Sprite). I had a little gin and tonic station set up if anyone felt an urge for one. My local liquor mart had Bombay dry gin on sale, so I'd bought a bottle, along with an 8-pack of mini-bottles of tonic. For ice, I pulled out an old champagne bucket that I'd bought years ago when a bar in Chicago closed.

Then there's the food: Bonnye provided deep fried cheese sticks (actually baked) and roll-up thingees (I forgot to try one, so I can't tell you what they tasted like); these were why she was joking about a TGI Friday party. I brought some mini-pork and vegetable egg rolls that I'd bought from Xander school's Market Day program. They're mostly veggie - I think the pork went through on stilts - but they weren't bad. I ate 2 or 3. (Another couple when I got home.) 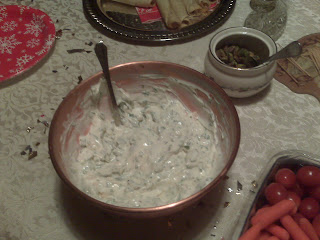 I bought a little raw veggie combo at the grocery: tomatoes, celery, carrots, broccoli. For a dip, I did draw on my original proposal and made a dip from Jim Beard's entertaining cookbook:
2 C mayo
1 C sour cream
1/2 C parsley
1/4 C tarragon (my change from his 1/2 C chives)
a handful of freeze-dried shallots, from the Spice House in Evanston, IL
(my change)
1 T tabasco sauce

This turned out to be a great, fresh-tasting dip for the veggies, and certainly better than the little packet of dip that came with them. 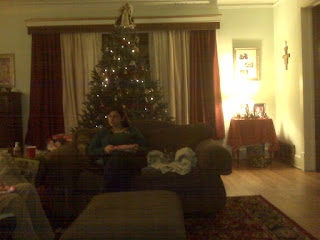 I'd also planned to make the smoked salmon pate recipe from Beard's book, but I went out NY Eve afternoon to look for smoked salmon, and there was none to be found! I don't think that means a lot of people here eat it, just that most stores don't carry it. The clerk at WalMart said they'd had it but were sold out. Anyway, here's the recipe I would have made:
1 lb smoked salmon
1 onion diced (I'd bought some red onion pre-diced to save time)
enough sour cream to bind it together (creme fraiche would probably work great)
dill to garnish, though I had some fresh dill and was planning to just mix it in

I was going to serve the pate with some pumpernickel bread that I baked last weekend using this recipe: http://www.pumpernickelbreadrecipe.com. I skipped the raisins it calls for. The molasses taste turned out a bit stronger than I'm used to in pumpernickel, but it's good bread. The salmon pate would have gone great with it. 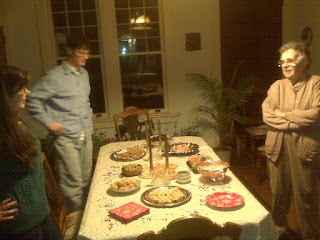 I was going to serve warm toasted almonds and thought I had some in the freezer in the basement. When I went to get them, well, every other kind of nut, but no almonds! So lesson - what number am I up to now? - make sure before the day of the party what you have (almonds) and what you'll need (smoked salmon)! Walnuts didn't appeal to me, and I figured I'd be the only one to eat filberts. But I had some raw pistachios from Nuts Online, so I toasted about half pound of those at 350 degrees until I could smell them. Sea salt sprinkled over them, and spooned into my little honey pot, which worked great as a nut bowl.

I also bought a trio of stuffed olives for people to nibble on, or to put in the G&Ts if anyone had wanted one of those: stuffed with almonds, stuffed with blue cheese, and stuffed with chipotle. I had one of the chipotles, and it was really spicy! Both the others were good. (They were better later when I got home and ate some more with cream cheese.) 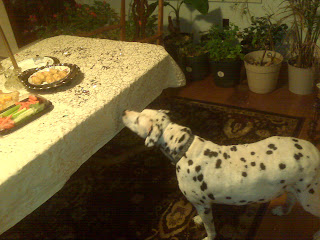 So that was basically our small, friends and family New Year's Eve party. We all had a nice time chatting for a couple hours. Charlie was allowed to come to the party the last half hour and, typical dalmatian, headed right to the table and was ready to stretch her long, swan-like neck out to grab something. Xander, as you see in one picture, went for the Oreos. After I took mom home, I came back for champagne cocktails (sugar cube, few dashes of bitters, and champagne), which I made.

When you have to change your plans and the last minute and downsize, there's nothing wrong with mix and matching store-bought finger food with a few homemade items. It doesn't stress you out, and what people really are looking for from a party is good conversation anyway (well, at least when you get to a certain age!). Hopefully next year we'll do it again, now that we have the tradition established.

I hope all my readers have a great 2009, and thanks for reading my blog this year.